Life is challenging.  Is it just me, or have you noticed that too?  Things go really smooth for a while, then things fall apart.  Just when you think “I’ve got it all figured out,” the banana peel of life slips under your foot and you find yourself flat on your “you know what.”  The only antidote to life’s inevitable pratfalls is persistence.

In June of 2006 Zina and I travelled with our friends Andi and Keith to beautiful Santa Fe, NM.  Serene, artistic and ancient (by American standards), set between the majestic Sangre de Cristo mountains to the east and the Jemez mountains to the west, Santa Fe is a desert sitting at 7000 feet above sea level.  The awe one feels surrounded by cascades of burnt color with a backdrop of Alpine forests co-mingles with shortness of breath in that rarified atmosphere.  And those mountains?  Another 5000 feet above Santa Fe they loom, calling for these aging legs to make the climb.

And climb we did, or at least tried.  Confident in my lungs, accustomed to running long distances (but at sea level!), Keith and I began a 2000 foot ascent with the certainty of two rather ignorant fools!  Two hours later, gasping for air and parched with thirst (yes, we didn’t even bring hydration for a desert hike!), we came to our senses and descended quickly.  Five days later we were successful, having acclimatized to the altitude, starting the climb very early in the day, bringing sufficient energy bars and, yes, a good supply of water.  Here we are at the top of a 9200 foot summit, tired, sore, but VERY happy: 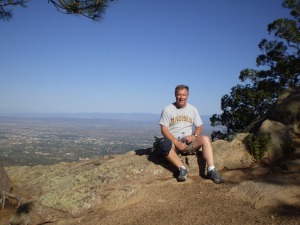 We flew home a day later and embellished the accomplishment with skill and delight.  The story became more bold and intrepid with each telling, but anyone who knows us just laughed, rolled their eyes, and humored us.  Such is the fate of men married to women who know them all too well!

Now, the main reason we traveled to Santa Fe was to visit our son Phil, who was completing a Masters degree in Eastern Classic Studies at St. Johns College in Santa Fe.  Unlike his elders, Phil kept himself in great shape and had done much biking and climbing during his year at this altitude.  His graduation was coming up just 6 weeks after our visit and I decided to go, solo, to his commencement exercise.  Before we left from our June visit Phil suggested that on my return we climb Deception Peak, starting from the parking lot of the Santa Fe ski basin (elevation approximately 10,000 feet) and ascending to about 12,200 feet.  I decided to do it, and began preparing as soon as we returned to Delaware.

For the next 6 weeks I ran daily on the David English Trail in White Clay Creek State Park.  It’s only about 2.5 miles long, but it ascends sharply, about 160 foot, in less than a mile.  Day after day, two laps, three laps at a time, up and down that steep hill.  Twice a day sometimes.  Taking care to hydrate regularly (this was during July and August), eating a diet rich in protein to help build muscle mass, replacing lost electrolytes and carbs, until I could cover that distance comfortably.  Off to Santa Fe in mid August; joyfully watching my son receive his degree; then rising early to climb.

We made it to the top of that peak!  Phil and and his best friend Doug had hardly a change in their breathing.  This old man?  Breathing hard, but making it all the same.  Stronger from the persistence of practice.  Experiencing the felt sense of resilience.

Resilience.  To be able to endure, to bend, to sustain.  Ego resilience, not losing our sense of self in the midst of intense challenge.  How can we build this resilience?  It’s simple, but it’s difficult.

If we are to build ego resilience we must choose tasks that require persistence.  We must organize those tasks, set schedules, understand limits, but endeavor to exceed those limits.  Persistence is a virtue, a gift that we can cultivate through disciplined inquiry, commitment, and action.  Every act of persistence forms a deeper and firmer foundation of ego strength.  It doesn’t matter if the persistence is physical, as in exercise, intellectual, as in education, emotional, as in extending compassion to another’s suffering, or behavioral, as in establishing or breaking a habit.  ANY act of persistence builds ego strength, and enables us to bring greater endurance to future events that challenge.

Back in 2008 I organized my life around building physical resilience for a difficult challenge.  When I returned in mid August it was to a world in which my father was living his final 6 weeks.  The work I had done preparing for that climb turned out to have also strengthened my spiritual and emotional resilience.  With the loving support of my wife, my children, my family and friends (especially my fellow meditators), I sustained and endured.

What projects can you take on that will build ego resilience?  Any endeavor that requires persistence will do.  Here’s an easy one to start with: sitting meditation.  Committing yourself to 10 minutes, and when the wandering mind says “enough,” redirect your attention again to breath, to living, and persist mindfully to the end.  Here’s another: listen.  The next time someone natters on and on and you don’t think you can remain present and patient, redirect your attention to that person, and persist mindfully to the end.  Every day of every person’s life presents opportunities to direct our attention in a way that demands persistence, and each act of persistence “strengthens the muscle” of ego resilience.

Well, just going this far reading this material about ego-depletion, replenishment, and resilience is an act of persistence!  See, it’s that easy!  There’s one more point to make about building resilience, and that will come in a few days.  I hope these reflections have been helpful.  I know that re-learning this material has helped me tremendously, and I wish the same help for you.

I am a Pastoral Counselor in private practice in Wilmington DE. I teach Mindfulness Based Stress Reduction as part of my work as a therapist.

Thanks! Good to hear from you; hope all is well.